“You mad cuz your girl on Facebook poking me, so uh
You know the G, I hit her up like ‘Hello Elle…'”
J. Cole, “College Boy“

Mark Zuckerberg is most well-known as the founder of Facebook and one of the world’s wealthiest people. The lesser-known fact about Zuckerberg is that he’s an understated, humble guy.

In 2008, I had the opportunity to interview both Mark Zuckerberg and Sheryl Sandberg at a Harvard  Business School event in which I presented Zuckerberg the HBS Entrepreneur of the Year Award. Facebook was four years old and four years away from its 2012 IPO. At 23, Zuckerberg had just been listed as the youngest person on the Forbes Billionaire list, at an estimated net worth of $1.5 billion. 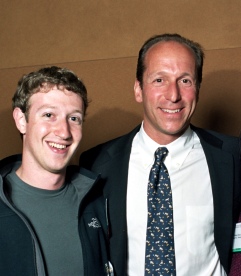 “So what are you going to spend all that cash on?” I asked Zuckerberg during the interview.

His reply: “I’m not really worth all that money because it’s just on paper.”

Wise words for someone still in his early 20s.

Zuckerberg also talked about Eric Schmidt, then-CEO of Google, coming over for dinner at his sparsely-furnished apartment. In the absence of chairs, the two sat on buckets and discussed the future of the Internet.

Like others who have interviewed Zuckerberg, I was struck by his modest disposition, as well as his thoughtful and articulate responses.

Sheryl Sandberg was equally as impressive. She had just joined Facebook as COO and yet it was clear, based on her responses, that she had a plan for growing Facebook. It was also obvious that Sandberg and Zuckerberg had a natural simpatico, even at this early stage in their collaboration. Their interactions were marked by a positive energy, and they even finished one another’s sentences.

By all accounts, Zuckerberg and Sandberg have remained as humble and understated even after Facebook’s IPO turned their “money on paper” into actual riches. Zuckerberg may have upgraded to a big home in Palo Alto, but he also poured his entire $45 billion fortune into a new philanthropic enterprise––one that allows him to use his business acumen to influence public policy and and support specific causes.

Amidst the pervasive media reports of Silicon Valley scandals involving wealthy entrepreneurs, it’s important to recognize the good eggs like Mark Zuckerberg and Sheryl Sandberg. True or not, stories of nefarious behavior are not characteristic of the Silicon Valley that I have known for two decades as a venture capitalist. What the headlines don’t cover are the numerous entrepreneurs who have built successful companies, made millions, and now live rather quiet lives.